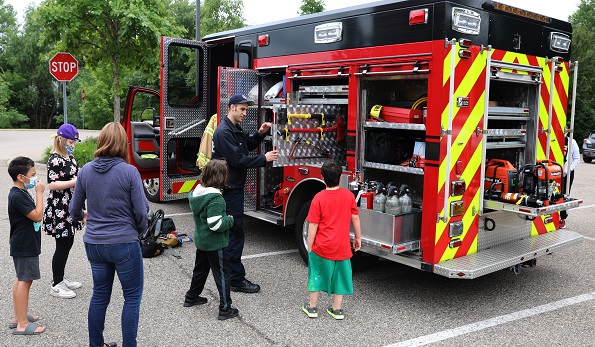 Richfield firefighters were interested in acquiring basic Spanish speaking skills to work more effectively in the field with the city’s large Latino population. In response, Richfield’s Fire Department started offering on-site Spanish lessons in 2018 for their front-line firefighters, with training focused on phrases helpful to emergency service situations for EMS and fire. Richfield shared this language program was originally undertaken in Brooklyn Park and Minneapolis precincts.

Personnel also bring along a medical bag to each call that includes a card of various Spanish- and English-translated phrases to further facilitate communication.

Initially, the language training was opened up to other interested city of Richfield departments, and while successful, then Fire Chief Kewitsch said if he was to roll out the program again, he would limit sessions to fire staff, noting the phrases the fire department sought for their work can vary greatly from other departments’ needs. Chief Kewitsch shared that working with Manisha Nordine, director of Language Central, was a great experience, and if he rolled out a program like this again, he would laser focus on emergency response phrases and eliminate, or greatly reduce, time spent on areas like verb conjugation.

The city initially spent $8,000 for eight weeks of 90-minute Spanish speaking sessions through Language Central. This calculates out roughly to a cost of $300/firefighter. Staff made a commitment to practice among each other and while on calls.

The program is successful even years after implementation, and fire staff continue to use key Spanish phrases out in the field. As an example, Fire Chief Mike Dobesh shared as an example of when he responded to a home fire where the residents spoke Spanish. He was able greet the homeowner and tell the individual his name in Spanish. That act alone went a long way in establishing trust with the homeowner.

But, Dobesh noted, these skills are perishable and need to be practiced. In 2020, the fire department offered a quarterly refresher course of two hours for the three fire shifts at an annual cost of $3,000. Spanish speaking is a preferred skill, not a Richfield job requirement, so the class time is paid work time, but if an employee misses one of the refresher courses they are not required to make up the class. COVID-19 has taken a toll on the ability to maintain the quarterly refreshers, but the city is intending on restarting the program as soon as they can safely do so.

The program is important because “it demonstrates to the public that we are trying to meet them where they are at,” said Dobesh. “This is a great step to prioritizing the health and safety of our community.”