For cities, one of the most expensive benefits related to duty disability retirements is a “continued health insurance benefit,” and the cost for it increases every year.

The Public Employees Retirement Association (PERA) has seen an increase recently in the number of police and firefighter retirees claiming to have a duty disability, says PERA Executive Director Doug Anderson.

Anderson reviewed this and other trends related to duty disability claims in the PERA-Police & Fire (P&F) Plan at the Feb. 13 meeting of the PERA Board of Trustees.

The PERA-P&F Plan is the state pension plan for full-time local police officers and firefighters hired after 1980. The plan covers more than 11,000 active public safety officers and pays benefits to 10,000 retirees and survivors.

In his presentation, Anderson highlighted the following trends:

What is a duty disability retirement?

There are significant differences in benefits between regular and duty disability retirement benefits.

A duty disability, which is determined by PERA, means the employee has a “physical or psychological condition that is expected to prevent a member, for a period of not less than 12 months, from performing the normal duties of the position held by a person who is a member of the public employees police and fire retirement plan, and that is the direct result of an injury incurred during, or a disease arising out of, the performance of inherently dangerous duties that are specific to the positions covered by the public employees police and fire retirement plan.”

How does a duty disability retirement differ from a regular retirement?

For example, certain duty disability retirees may be eligible to receive up to 60 % of their final average salary tax-free for a period of time. Those taking a regular retirement are taxed on payments made by PERA-P&F.

For cities, one of the most expensive benefits related to duty disability retirements is a so-called “continued health insurance benefit.” Minnesota Statutes, section 299A.465 requires public employers to continue health insurance benefits for firefighters and peace officers injured in the line of duty and for dependents of those killed in the line of duty. This coverage lasts until age 65.

When this law was enacted in 1997, it contained a provision requiring the Department of Public Safety (DPS) to reimburse employers for the full amount of administering this benefit. By 2002, the fund created to provide this benefit became deficient.

Instead of increasing the fund, the 2003 Legislature amended the law to pro-rate reimbursements to cities based on the amount available and the number of eligible applicants. The 2003 law change triggered a significant and unanticipated cost to cities. The cost has increased every year for cities, and the funding for the account has never been increased.

In 2015, the Legislature expanded the health insurance benefit to include survivors of volunteer firefighters who die in the line of duty. This change increased the number of firefighters eligible for this benefit from 2,000 to 20,000 — without increasing funding for the reimbursement account.

In fiscal year (FY) 2019, the requests for reimbursements topped $5 million, but the state provided just $1.367 million for that purpose. Under the current law, employers are reimbursed on a pro-rated basis. The chart below shows the reimbursement amounts requested and the amounts reimbursed for FY 2010 to FY 2019. The data was provided by the DPS. 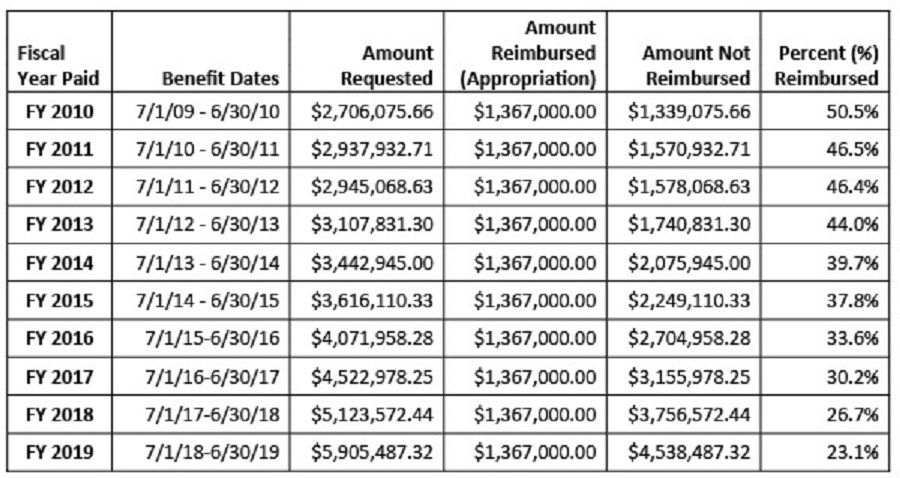 A bill that would provide full reimbursement to employers for complying with the health insurance mandate was introduced in the Senate and House in 2019. Initiated by the League of Minnesota Cities, SF 825 (Sen. Jeff Howe, R-Rockville) and HF 1009 (Rep. Paul Marquart, DFL-Dilworth), would require an annual general fund appropriation to fully compensate local units of government for the cost of continuing health insurance benefits for police officers and firefighters injured in the line of duty and for dependents of those killed in the line of duty.

Given the trends outlined in the PERA Board of Trustees briefing, the League will continue to raise the issue of the health insurance mandate with legislators and other stakeholders.