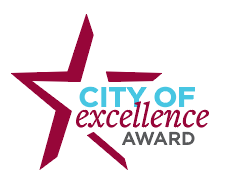 The City of Sartell received a 2021 League of Minnesota Cities (LMC) City of Excellence Award for its winter road pretreatment program. The program has saved the city thousands of dollars and reduced sodium chloride from running into surface and groundwater.

According to City Administrator Anna Gruber, Sartell has saved nearly $152,000 over the six years it has been applying a brine of water and ordinary road salt to roadways before snowfalls.

“Snowfalls were easily absorbed more quickly in the brine than when using dry road salt, and this allowed staff to limit the amount of on-call and overtime report backs to work,” says Gruber. “Pretreatment turned our snowplowing from reactive to proactive maintenance.”

Sartell has 18,000 residents and is located in Benton and Stearns counties on the Mississippi River and is about six miles north of St. Cloud.

The Public Works Department learned how to make its own brine and started using it in 2016. It started with baby steps, listening to stories about how the state and proactive counties and cities had used these methods. Everyone was impressed.

They mix their own solution of salt brine — which is 23% salt and 77% water — and they’re delighted that the mixture doesn’t just melt the snow, it also acts as a release agent and allows the plows to do a better job scraping off the snow.

Kothenbeutel says they initially worried that the wet brine would make road conditions worse, but it didn’t turn out that way. In fact, the water concentration allows the salt to stick to the roadway pores and prevents slippery conditions.

One trick the city really likes: Applying the brine every Friday if there is a reasonable chance of a snow event so no one on the crew has to come back to plow over the weekend.

“I can tell on Monday morning that a major bridge I cross doesn’t have the traffic backup it used to,” says Kothenbeutel. “It’s not slippery and everyone moves along.”

The city does not use the pretreatment brine mixture throughout the winter, however.

“This brine works best in the fall and spring months and isn’t effective when the pavement is less than 15 degrees,” says Larry Then, Sartell’s maintenance supervisor. “We turn to dry salt with brine sprayed at the spinner from late December through February because it’s so much colder.”

The pavement temperature, not the air temperature, is what determines whether this anti-icing strategy is used. Then added that although they know it’s possible to change ingredients in the brine so it works at a lower temperature, the city is content with keeping the program simple.

“We started using this method on our main roads, and this year we’ll add some residential streets,” says Then. “We see private snow removal companies using brine on sidewalks and parking lots now, and even our schools are expressing an interest in brine.”

Not only is the City of Sartell saving time and money, it has also reduced the impact of chloride running off into local lakes, rivers, and groundwater by reducing salt-use so significantly.

“We are aware that we don’t want to leave the next generation with lakes filled with our chloride,” says Kothenbeutel.

The impetus for adding a statewide, anti-icing strategy for winter roads

Scientists in Minnesota have understood since the 1960s — when road salt use was becoming standard — that chloride likely had a negative effect on the environment. About 20 years ago, though, the MPCA discovered chloride was becoming a serious environmental threat.

That’s about the time when the University of Minnesota and other organizations began measuring the chloride levels in metropolitan-area lakes and streams, and discovered several with chloride that went beyond a safe level for sustaining fish and plant life.

The chief sources of these alarming levels of chloride in some of Minnesota’s cherished freshwaters? Winter road salt and household water softener salt.

Chloride is toxic to aquatic life and it never goes away. Minnesota lakes still have the chloride that our grandparents washed away into our freshwaters.

One way to take chloride out of the water is to use reverse osmosis technology, but it is too expensive to use.

The MPCA took a serious step toward disrupting the ever-increasing chloride levels in 2007 when it offered the first Smart Salting certification program for winter maintenance professionals in cities, counties, and businesses.

“The goal of the Smart Salting program is to educate maintenance professionals on how to maintain safety while minimizing impacts on the environment,” says Brooke Asleson, MPCA’s chloride program administrator. “The combination of one instructor’s ability to provide technical content and the other instructor’s direct maintenance experience inspires change.”

One of the biggest eye-openers for Smart Salting attendees is learning the counter-intuitive fact that they can use significantly less salt than they had been using to make roads, sidewalks, and parking lots safe.

“If you look at the evolution of winter road maintenance, Minnesotans had low expectations about walking and driving. We drove slowly, wore boots, and used chains on our tires,” says Connie Fortin, president of Fortin Consulting. “We now are at a point where everyone expects to walk on bare pavement and to drive 60 miles per hour.”

“Really, all of us should shape up, put our boots on, and drive slowly because we are responsible for this environmental problem,” says Fortin.

Given that people’s expectations are unlikely to change any time soon, the use of liquid deicers is going to dominate winter maintenance from now on, she adds.

To be clear, Smart Salting best practices encourage both anti-icing and de-icing strategies with brine. One uses brine before snowfall to prevent it from sticking to the road, and the other uses it with dry salt after snowfall to speed up melting.

“We tell the attendees to be aggressive in your physical removal, and get out early and often with the blade, broom, and deicer,” says Fortin. “They learn about calibrating and upgrading their equipment, lowering application rates, using the right products for the given pavement temperatures, and more.”

In 2018, the MPCA targeted chloride as a major water pollutant in its fiveyear strategic plan.

“When that happened, more people, resources, and inter-agency cooperation kicked into gear to tackle the chloride problem,” said Asleson, “And it’s my job to focus many parts of the agency on assisting public and private organizations with reducing chloride to protect water resources.”

In the fall of 2020, elements of the Statewide Management Plan were included in the MPCA general MS4 permit (city municipal stormwater permit).

The City of Sartell has taken full advantage of the MPCA’s training since 2017, and maintenance crews have implemented most Smart Salting best practices.

“We’re forever learning and communicating about our removal plan, brine, and equipment,” says Kothenbeutel. “With our employees on board to use the new technology, it is easy to implement Smart Salting techniques.”

Brine or no brine, one thing about winter road maintenance will never change.

“Zero snow events are the same, and so we’re always adjusting our plans,” says Then. “You have to be flexible, but at least now we have more tools and ideas to work with.”

Renee McGivern is a freelance writer.