The governing bodies of Ramsey County, Olmstead County, and the City of Duluth established absentee ballot boards for the November 2020 general election.

Although their practices varied, all three of the governing bodies appointed to these boards both election judges and staff who were trained to process and count absentee ballots. The staff were appointed under Minn. Stat. § 203B.121, which authorizes the appointment of “deputy county auditors” and “deputy city clerks.” 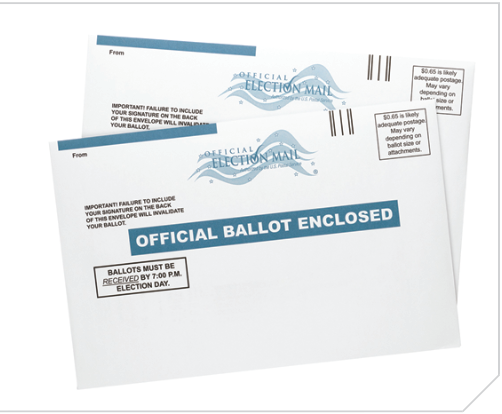 The Minnesota Voters Alliance, the Republican Party of Minnesota, and several individuals (collectively, the petitioners) filed petitions with the district court requesting writs of mandamus (court orders requiring someone to execute a mandatory legal duty). The petitions claimed that the governing bodies’ method of establishing the boards violated state law. The petitioners claimed that the governing bodies were required to first exhaust their major political party lists of potential election judges before appointing any deputy county auditors or deputy city clerks. The petitioners also argued that the appointed staff were not “bona fide” (real) deputies because they did not have authority to perform all the tasks that a county auditor or a city clerk could perform, and that the appointed deputies were required to disclose their party affiliation or non-affiliation as election judges must do.

The district court denied petitioners’ requested relief. The Minnesota Court of Appeals affirmed the district court’s decision, and ruled that the petitioners had failed to establish that the governing bodies had violated any mandatory duties clearly established by law. Minnesota Voters Alliance v. County of Ramsey, N.W.2d (Minn. Ct. App. 2021).

During an argument with his wife at their Rhode Island home, Edward Caniglia placed his handgun on the dining room table and asked his wife to shoot him and “get it over with.” Instead, she left the home and spent the night in a hotel.

The next morning, she was unable to reach her husband by phone, so she called the police and requested a welfare check. Police officers accompanied her to the home where they found Caniglia on the porch. The officers called an ambulance based on their concern that Caniglia was a risk to himself and others. 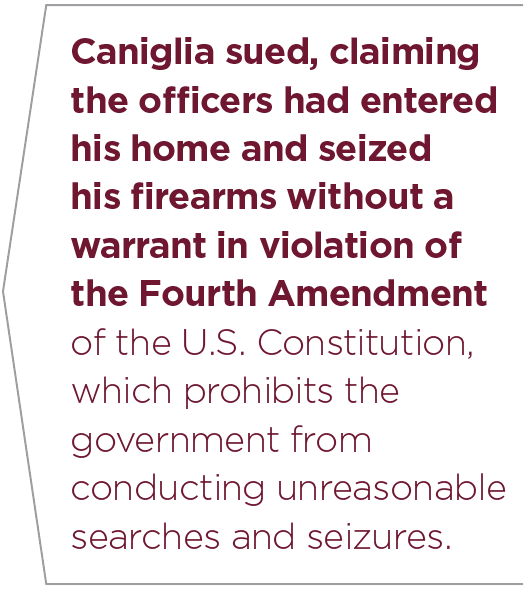 Caniglia agreed to go to the hospital for a psychiatric evaluation on the condition that the officers not confiscate his firearms. But once Caniglia left, the officers removed the firearms from the home.

Caniglia sued, claiming the officers had entered his home and seized his firearms without a warrant in violation of the Fourth Amendment of the U.S. Constitution, which prohibits the government from conducting unreasonable searches and seizures. The district court granted summary judgment (court-ordered judgment without a trial) in the officers’ favor. The U.S. Court of Appeals for the First Circuit affirmed, ruling that the officers’ actions were authorized under the “community caretaking exception” to the warrant requirement, which the United States Supreme Court had previously recognized in a case involving the warrantless search of an impounded vehicle for an unsecured weapon.

In a unanimous opinion, the Supreme Court reversed the court of appeals’ decision and held that the community caretaking exception does not extend to warrantless searches and seizures in a home. The Supreme Court noted that, under the appropriate circumstances, exigent circumstances or consent may provide the government with constitutional authority for a warrantless search and seizure in a home. Caniglia v. Strom, 141 S. Ct. 870 (2021).

A tribal police officer arrested Joshua James Cooley after noticing Cooley’s truck idling on the side of a public highway that runs through the Crow Indian Reservation in Montana. While questioning Cooley to figure out if he needed help, the officer suspected that Cooley might have drugs and might become violent, leading the officer to draw his weapon, detain Cooley, and search the truck for weapons. The officer found drugs and guns in the truck, which resulted in a federal prosecution against Cooley.

Cooley argued that the drugs and guns were illegally obtained and could not be used as evidence against him because the tribal officer did not have authority to stop and search a non-Indian like Cooley. The district court granted Cooley’s motion to suppress the evidence, and the U.S. Court of Appeals for the Ninth Circuit affirmed the district court’s decision.

The United States Supreme Court unanimously reversed the court of appeals’ decision and ruled that tribal governments (and their police officers) retain the power to temporarily stop and, if necessary, search non-Indians traveling on public rights-of-way through reservations for suspected violations of federal or state laws. United States v. Cooley, 141 S. Ct. 1638 (2021).

The City of Waconia adopted a citywide ordinance prohibiting permanent docks on any private lots abutting public waters. The city adopted the ordinance under Minn. Stat. § 412.221, sub. 12, which provides in part that a city council “shall have power to establish harbor and dock limits and by ordinance regulate the location, construction, and use of piers, docks, wharves, and boat houses on navigable waters.”

The Supreme Court concluded that the city’s ordinance functioned as a zoning ordinance under this test, and therefore, it was invalid for failure to comply with the procedural requirements of Section 462.357. The Supreme Court did not address whether the ordinance was also subject to the procedural requirements for water-surface-use ordinances. City of Waconia v. Dock, N.W.2d (Minn. 2021). Note: The League of Minnesota Cities Insurance Trust represented the city, and the League of Minnesota Cities filed an amicus brief in its support.

The City of Philadelphia terminated its foster-care services contract with Catholic Social Services (CSS) on the grounds that CSS declines, because of its religious beliefs, to certify same-sex couples as foster parents. The city claimed that this practice violates the non-discrimination requirements of the citywide Fair Practices Ordinance. 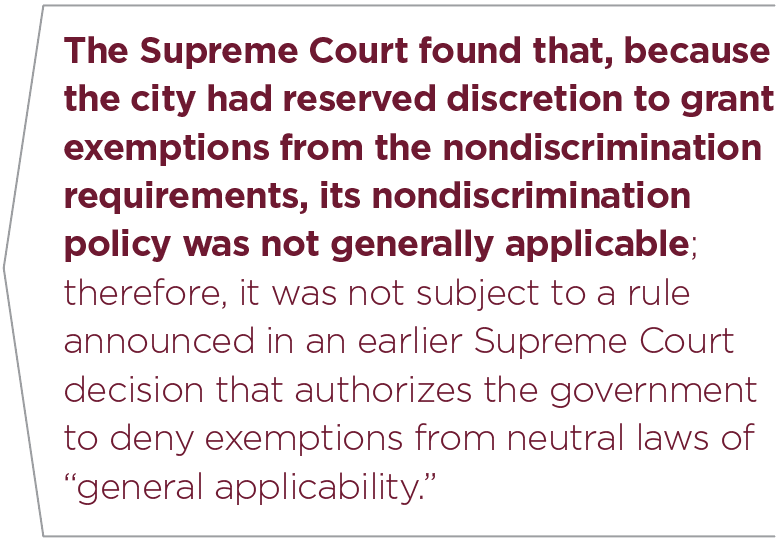 CSS and three affiliated foster parents sued, claiming the contract termination violated their rights under the free exercise and free speech clauses of the First Amendment to the U.S. Constitution.

The district court and the U.S. Court of Appeals for the Third Circuit ruled in the city’s favor. The United States Supreme Court reversed the court of appeals’ decision and unanimously ruled that the contract termination violated the free exercise clause.

The Supreme Court also concluded that the contract language triggered a strict-scrutiny review of the denial of CSS’s requested exemption, and that the denial failed to survive this review. The Supreme Court explained: “A government policy can survive strict scrutiny only if it advances ‘interests of the highest order’ and is narrowly tailored to achieve those interests. Put another way, so long as the government can achieve its interests in a manner that does not burden religion, it must do so.” Fulton v. City of Philadelphia, S. Ct. (2021). 141 S. Ct. 1868 (2021).