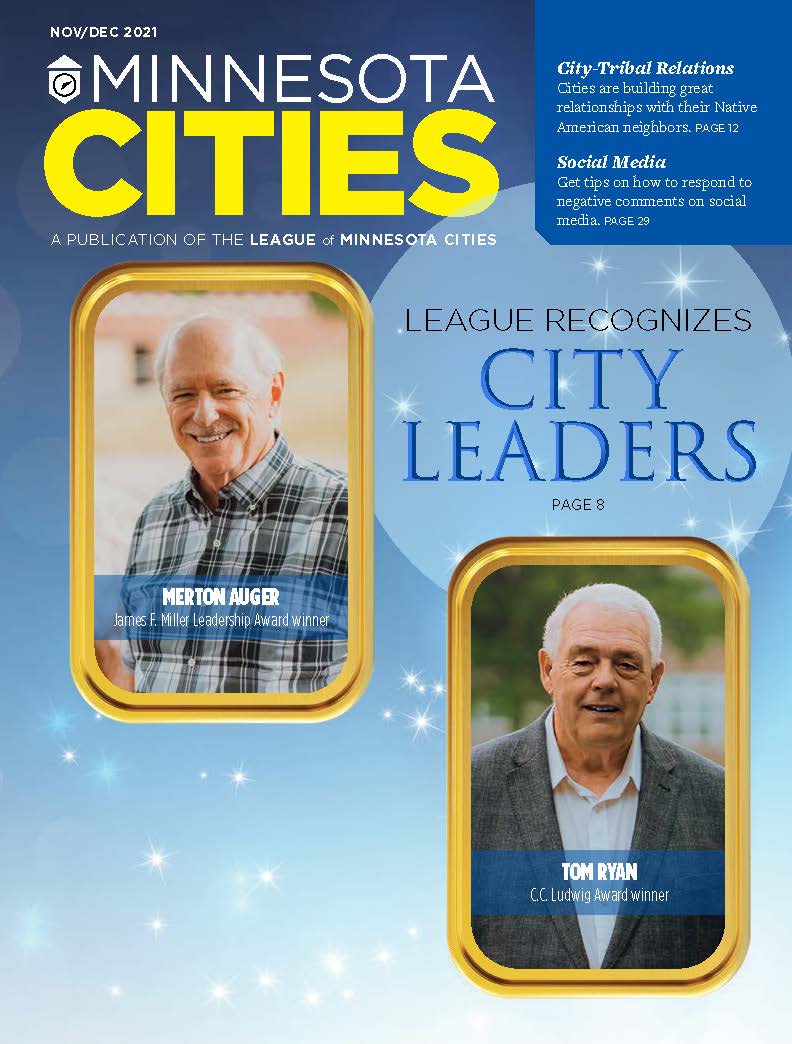 City of Minneapolis police officers who were conducting a welfare check entered Teresa Graham’s home without a warrant, seized her, and transported her to a hospital for a mental health evaluation. Graham sued the police officers and the city, claiming that the warrantless entry of her home and seizure of her person violated her rights under federal and state law. 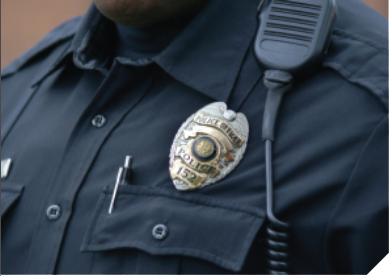 The district court granted summary judgment (court-ordered judgment without a trial) in favor of the police officers and the city. The 8th U.S. Circuit Court of Appeals affirmed the district court’s decision. The U.S. Supreme Court granted review of Graham’s appeal, vacated (canceled) the Court of Appeals’ decision, and sent the case back for the Court of Appeals to reconsider its decision based on the Supreme Court’s recent decision in Caniglia v. Strom, a 2021 decision in which the Supreme Court ruled that the community-caretaking exception to the warrant requirement does not apply to searches and seizures in a home.

The Court of Appeals once again affirmed the district court’s decision and ruled that the officers were entitled to qualified immunity from the federal claims and statutory immunity from the state claims. The Court of Appeals concluded that, based on the existing law at the time, the officers acted reasonably when they entered Graham’s home because the warrantless entry was justified by their reasonable belief that there was a mental health concern and an emergency requiring attention. The Court of Appeals noted that, going forward, the standard of cause that officers will need to justify a warrantless seizure of a person for an emergency mental health evaluation is probable cause (not the lesser standard of reasonable belief) that a person poses “an emergent danger — that is, one calling for prompt action — to herself or others.” Graham v. Barnette, 5 F.4th 872 (8th Cir. 2021). 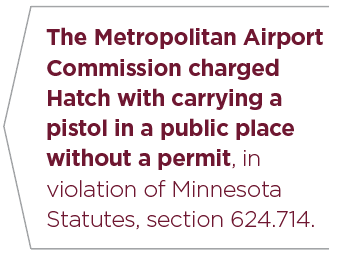 Airport police officers stopped to assist Nathan Hatch after his truck broke down. A resulting search of the truck revealed a loaded, uncased handgun in a backpack in the back seat. The Metropolitan Airport Commission charged Hatch with carrying a pistol in a public place without a permit, in violation of Minnesota Statutes, section 624.714. Hatch made a motion to dismiss the charge, claiming that the statute is unconstitutional because it violates his Second Amendment right “to keep and bear arms” guaranteed under the U.S. Constitution.

The district court denied Hatch’s motion. The Minnesota Court of Appeals affirmed the district court’s decision, concluding that the statute is constitutional even under the strictest standard of constitutional review, which requires a statute to be narrowly tailored to advance a compelling state interest. The Minnesota Supreme Court affirmed the Court of Appeals’ decision and ruled that the statute does not violate the Second Amendment. The Supreme Court concluded that the statute serves the compelling state interest of ensuring public safety, and that “the statutory requirements to receive a permit to carry are not substantially broader than necessary to ensure public safety.” State v. Hatch, N.W.2d (Minn. 2021).

The City of Cambridge’s zoning code prohibits more than four unrelated people from living together in a single-family R-1 zoning district. The city brought a zoning enforcement action against One Love Housing, which was providing sober housing in a five-bedroom house located in an R-1 zoning district. The city requested the district court to issue a declaratory judgment that One Love Housing had violated the zoning code by housing up to 14 unrelated individuals in the house, and to issue an order prohibiting One Love Housing from engaging in future violations. 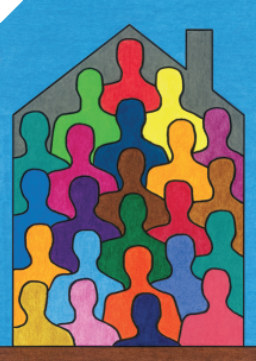 In response to the city’s request, One Love Housing raised two counterclaims, arguing that the city’s actions, in failing to grant an exemption from its zoning requirements, violated the rights of the sober-housing residents under the Americans with Disabilities Act (ADA) and the Fair Housing Act (FHA). The district court granted summary judgment (court-ordered judgment without a trial) in the city’s favor and dismissed the counterclaims.

The Minnesota Court of Appeals affirmed the district court’s decision and ruled that there was insufficient evidence to show that the sober-housing residents were “disabled” under the meaning of the ADA or the FHA. The Court of Appeals concluded that the mere status of being someone who is recovering from alcoholism or drug addiction does not necessarily imply that one is disabled under the requirements of the ADA or the FHA. Instead, such a claim of disability requires an individualized inquiry. City of Cambridge v. One Love Housing, LLC, No. A20-1313 (Minn. Ct. App. June 28, 2021) (nonprecedential opinion). Note: The League of Minnesota Cities Insurance Trust represented the city.

Arthur Gregory Lange drove by a California Highway Patrol officer while repeatedly honking his horn and playing loud music. Finding this behavior unusual, the officer began following Lange, intending to conduct a traffic stop. The officer activated his vehicle’s overhead lights, but Lange failed to yield. Instead, Lange turned into a driveway and drove into a garage. The officer followed and interrupted the garage door from closing, observed that Lange appeared to be intoxicated, and conducted sobriety tests on him. Based on evidence obtained from this interaction, Lange was charged with two traffic misdemeanors. 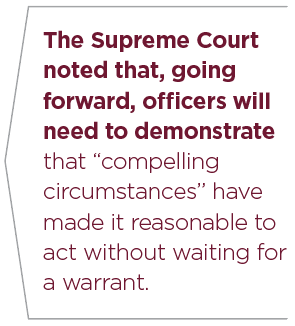 Lange made a motion to suppress this evidence, claiming it was obtained in violation of his Fourth Amendment right under the U.S. Constitution to be free of unreasonable searches and seizures. The prosecutor argued that exigent (pressing) circumstances justified the officer’s warrantless entry into the garage because there was probable cause to arrest Lange for misdemeanor driving offenses. The trial court denied Lange’s motion to suppress, and the appellate court affirmed this ruling and affirmed Lange’s judgment of conviction, reasoning that the pursuit of a misdemeanor suspect is always permissible under the exigent- circumstances exception to the warrant requirement.

Seven-year-old Carter Justice attended a birthday party at Pump It Up, an indoor amusement center with inflatable equipment. Before entering the party, Justice’s mother signed a form agreement that included an exculpatory clause (waiver) that released the business from “any and all” claims that she and Justice might have based on his use of the inflatable equipment. During the party, Justice fell off an inflatable obstacle course and hit his head on the floor, causing a head injury that required medical treatment. Several years later, when Justice was 18 years old, he sued Marvel, LLC, the business that owns Pump It Up, for negligence. Marvel made a motion for summary judgment (court-ordered judgment without a trial) based on the waiver that Justice’s mother had signed.

The district court granted the motion, ruling that the waiver was valid and enforceable against Justice. The Minnesota Court of Appeals affirmed the district court’s decision and ruled that a parent is authorized to sign, on behalf of their minor child, a waiver that releases a negligence claim against a third party, and that if the waiver is valid and enforceable, it is binding on the child even after the child becomes an adult. The Court of Appeals also ruled that, if a waiver is overly broad because it appears to release claims based on intentional, willful, or wanton negligence, a court should interpret the waiver as valid and enforceable only against claims based on ordinary negligence, and not against any claims based on greater amounts of negligence. Justice v. Marvel, LLC, N.W.2d (Minn. Ct. App. 2021).