LAND USE
Nonconforming use statute

The nonconforming use statute (Minnesota Statutes, section 462.357, subdivision 1e) authorizes an existing land use to continue, but not to expand, after a zoning change is made that prohibits the use. AIM Development (USA) LLC currently owns property in the City of Sartell that previously operated as an industrial landfill for a paper mill. The landfill became a nonconforming use in 1989 because of a zoning amendment. 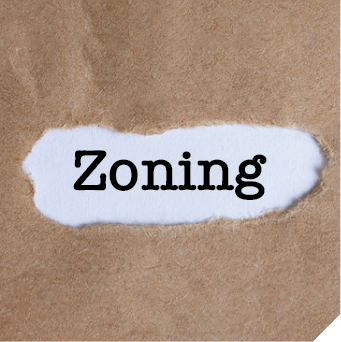 The landfill continued to operate as a legal nonconforming use, collecting waste generated exclusively in conjunction with the paper mill’s operation. Fire demolished the paper mill in 2012, and AIM purchased the landfill property in January 2013. In 2013, the Minnesota Pollution Control Agency (MPCA) transferred the property’s landfill permit to AIM, providing that the facility could only accept certain types of waste, consistent with the waste the paper mill had generated.

In January 2014, AIM applied to the MPCA for a permit renewal, seeking authority to deposit waste generated by sources located outside the landfill site. The city objected to AIM’s application, and a dispute arose regarding whether AIM could accept waste from off-site sources. The district court granted summary judgment ( judgment without a trial) in the city’s favor. The Minnesota Court of Appeals affirmed the district court’s decision and ruled that AIM’s proposal to accept waste from off-site waste sources constitutes an impermissible expansion of the prior nonconforming use.

The Minnesota Supreme Court, in a divided decision, reversed the Court of Appeals’ decision, concluding that the case presented a unique problem, and that landfills should have special treatment under the nonconforming use statute. Therefore, the Supreme Court ruled that a landfill’s proposal to accept waste from additional waste sources does not, standing alone, constitute an expansion of the nonconforming use; instead, it constitutes an authorized “replacement” of new waste sources for the original waste source. The Supreme Court sent the case back to the Court of Appeals for it to consider the city’s additional arguments about why it has authority to prohibit AIM’s proposal to operate a landfill. AIM Development (USA) LLC v. City of Sartell, 946 N.W.2d 330 (Minn. 2020). 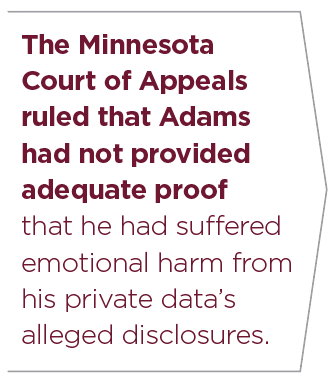 Oscar Adams, a resident of the Minnesota Sex Offender Program (MSOP), sued the commissioner of the Department of Human Services in her official capacity, claiming that MSOP employees disclosed his private data in violation of the Minnesota Government Data Practices Act (MGDPA) on two separate occasions. The pieces of private data at issue were: (1) his medical records number, and (2) information regarding a personal-property dispute he was pursuing against MSOP. Adams requested emotional distress damages as a remedy for these alleged violations.

The district court granted summary judgment ( judgment without a trial) in the commissioner’s favor, denying the MGDPA claims. The Minnesota Court of Appeals affirmed the district court’s decision and ruled that Adams had not provided adequate proof that he had suffered emotional harm from his private data’s alleged disclosures. The Court of Appeals concluded that, to successfully state a claim for emotional distress damages under the MGDPA, a plaintiff must “produce evidence to establish that emotional harm has occurred under circumstances tending to guarantee its genuineness.” Adams v. Harpstead, N.W.2d (Minn. Ct. App. July 6, 2020).

The City of Minneapolis adopted an ordinance that prohibits landlords from refusing to rent property to prospective tenants because of any requirement of a public assistance program. In the past, some landlords had rejected prospective tenants with federal housing vouchers, to avoid complying with the requirements of Section 8 of the United States Housing Act of 1937. A group of affected landlords sued, claiming the ordinance violates the Due Process Clause and the Equal Protection Clause of the Minnesota Constitution.

The district court granted summary judgment ( judgment without a trial) in the landlords’ favor on both claims. The Minnesota Court of Appeals reversed the district court’s decision on both claims. The Minnesota Supreme Court affirmed the Court of Appeals’ decision and upheld the ordinance, ruling that it does not violate the Minnesota Constitution’s guarantee of substantive due process or equal protection.

The Supreme Court concluded that the ordinance does not implicate a fundamental right, nor does it regulate based on any suspect classification. Therefore, the Supreme Court applied a deferential rational-basis standard of review, where a city must simply demonstrate that an ordinance is a rational means of achieving a legitimate policy goal. The Supreme Court ruled that the ordinance is a rational means for the city to achieve its policy goals of increasing housing opportunities for voucher holders, addressing discriminatory effects of housing denials, and prohibiting prejudice-based discrimination in rental housing. Fletcher Properties, Inc. v. City of Minneapolis, 947 N.W.2d 1 (Minn. 2020).

John Birkeland’s neighbors called 911 to report sounds of disturbance in his apartment, including yelling and breaking glass. At 10 p.m., City of Roseville police officers were dispatched to perform a welfare check on Birkeland. On the way, the officers learned that Birkeland had an outstanding misdemeanor warrant for his arrest, but that the warrant did not allow for a home arrest after 10 p.m. When officers arrived, they repeatedly asked Birkeland to open the door, but he replied “no” each time, adding that he was OK. 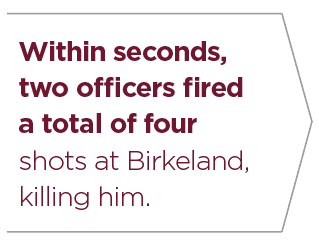 The officers told Birkeland that they could not leave until they knew he was OK, and that they would have to enter forcibly if he continued to refuse responding. After several minutes of silence, the officers used a battering ram to force open the door. The officers, including a K-9 officer who was working with a police dog, entered the apartment and eventually found Birkeland crouched in a bedroom closet. The K-9 officer testified that he could not: (1) tell if there was another person in the closet; (2) tell if there was a weapon in the closet; or (3) see Birkeland’s hands.

When Birkeland refused to come out after being warned about the dog, the K-9 officer let the dog into the closet. The dog bit Birkeland’s right knee. Birkeland responded by stabbing the dog’s face with a knife, causing the dog to yelp. Within seconds, two officers fired a total of four shots at Birkeland, killing him. Birkeland’s trustee filed a wrongful death lawsuit on his behalf, claiming that the use of deadly force was unreasonable and in violation of his constitutional rights.

The district court denied the city’s summary judgment motion (motion for judgment without a trial) for the deadly force claim. The 8th U.S. Circuit Court of Appeals reversed the district court’s decision, and it granted the officers qualified immunity from the claim. The Court of Appeals reasoned that the officers’ use of deadly force did not violate any constitutional right that was clearly established at the time of the incident, in light of: (1) the close proximity between the officers and Birkeland; (2) Birkeland’s failure to comply with the commands to drop the knife; and (3) Birkeland’s stabbing of the police dog with a knife. The Court of Appeals also granted the officers official immunity on the state law claims relating to the deadly use of force. Birkeland v. Jorgenson, F.3d (8th Cir. Aug. 20, 2020). 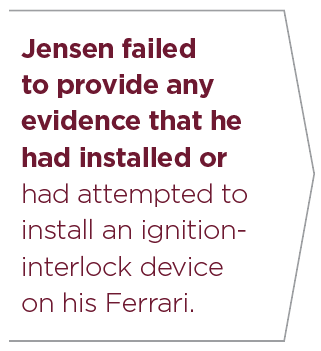 Jensen had previously participated in the ignition-interlock program in connection with a different vehicle. But he failed to provide any evidence that he had installed or had attempted to install an ignition-interlock device on his Ferrari.

The district court ordered the Ferrari forfeited to the Minnesota State Patrol. The Minnesota Court of Appeals affirmed the district court’s decision and ruled that a driver participating in the ignition-interlock program under Minnesota Statutes, section 171.306 must be enrolled in the program with the vehicle that is the subject of the forfeiture proceedings in order to prevent that vehicle’s forfeiture. Jensen v. 1985 Ferrari, N.W.2d (Minn. Ct. App. Aug. 31, 2020).