When the weather is nice, the Shooting Star State Trail beckons to LeRoy residents and visitors who are eager to bike past fields of sunflowers, indigo, and asters. The 29-mile trail starts in LeRoy (population 955), which is just south of Lake Louise State Park. The trail winds through the park before heading west to Austin. Wannabe cyclists in LeRoy, however, had a problem. Visitors often didn’t realize they needed a bike or didn’t want to lug one from home. It was also a hassle for some residents to bring their bikes to the trail. 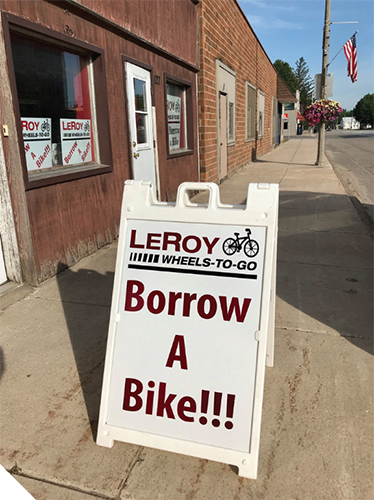 Last year, LeRoy found a solution. It started a Wheels-to-Go Bike Program that lends bikes of all sizes free of charge. The program has been a hit since it launched. It has promoted outdoor family activities and healthy living while also helping attract more people to downtown.

“It’s been a really good program,” says Patty White, LeRoy’s city clerk and treasurer, and one of several community members that helped launch the endeavor. “It’s another service we can offer as a city for both local people and visitors.”

The program was kickstarted in early 2019 when a former member of the LeRoy Economic Development Authority (EDA) spotted a brochure for a similar program in Pine Island and brought the idea to the EDA. “Everybody was on board and excited about it,” White says.

The EDA received funding for the program from the Statewide Health Improvement Partnership of Mower County, the LeRoy Community Foundation, and the Community Giving Program through Mayo Clinic Health, for a total of $9,500. In addition, residents and others donated bicycles.

Area resident Sharon Jacobson, an avid cyclist, volunteered to serve as a liaison with a cycling shop in Austin and helped choose additional bikes for purchase. The program ended up with a mix of road bikes for adults and children, adaptive bikes, pull-behind child carts, and tag-along bikes. The EDA also purchased bike helmets, bike pumps, and bike stands, and used funding to make brochures, signs, and bike labels.

“It really complements the camping season at the state park,” says Jacobson, “and it’s a good activity to do during COVID. It’s easy to distance outside.”

Bringing the program to life

At first, Wheels-to-Go shared an office with an EDA member who owns a business in town. This year, it moved into an empty EDA building downtown, benefitting from a larger space and its location four blocks from the start of the Shooting Star trail.

Word of the program has run in the local paper, and Axel Gumbel, a member of the Leroy EDA who’s overseeing the endeavor this year, often posts about it on the city’s Facebook page.

Gumbel also supervises an employee who checks bikes in and out. The employee and volunteers help with minor bike repairs, while more significant ones require a trip to the Austin bike shop.

Bikes are available Fridays 4-7 p.m., and weekends 8-10 a.m. and 4-6 p.m., from Memorial Day through September. They’re also available during the week by calling City Hall.

Cyclists 18 or older register by filling out a waiver, then select a helmet and bike. Children can borrow bikes with the signed authorization of a parent or guardian. Parents can also choose to sign a longer-lasting disclaimer.

Cyclists can keep bikes for a few hours, the full day, or even an entire weekend. Rentals are free, though donations are welcome.

Popular, even during the pandemic

During the program’s first season in 2019, 205 bikes were checked out and none were vandalized or stolen. This year, due to the coronavirus pandemic, the program stayed shuttered in May and June.

After Gumbel pushed for opening with enhanced sanitizing, the program finally reopened in early July. “In a pandemic, this is one of the activities you can do relatively safely,” he says.

With expenses, but no income, long-term funding will have to be addressed, Gumbel says, but for now there’s money to support a few more seasons. Ultimately, Gumbel wants to add more rentals to the mix.

“It does take a considerable amount of work,” he says. “I think part of the success is that it’s a very low-key, nimble operation, and it’s the combination of having the funds and having the manpower. The program was much welcomed when we premiered it, and I’d love to see it grow.”