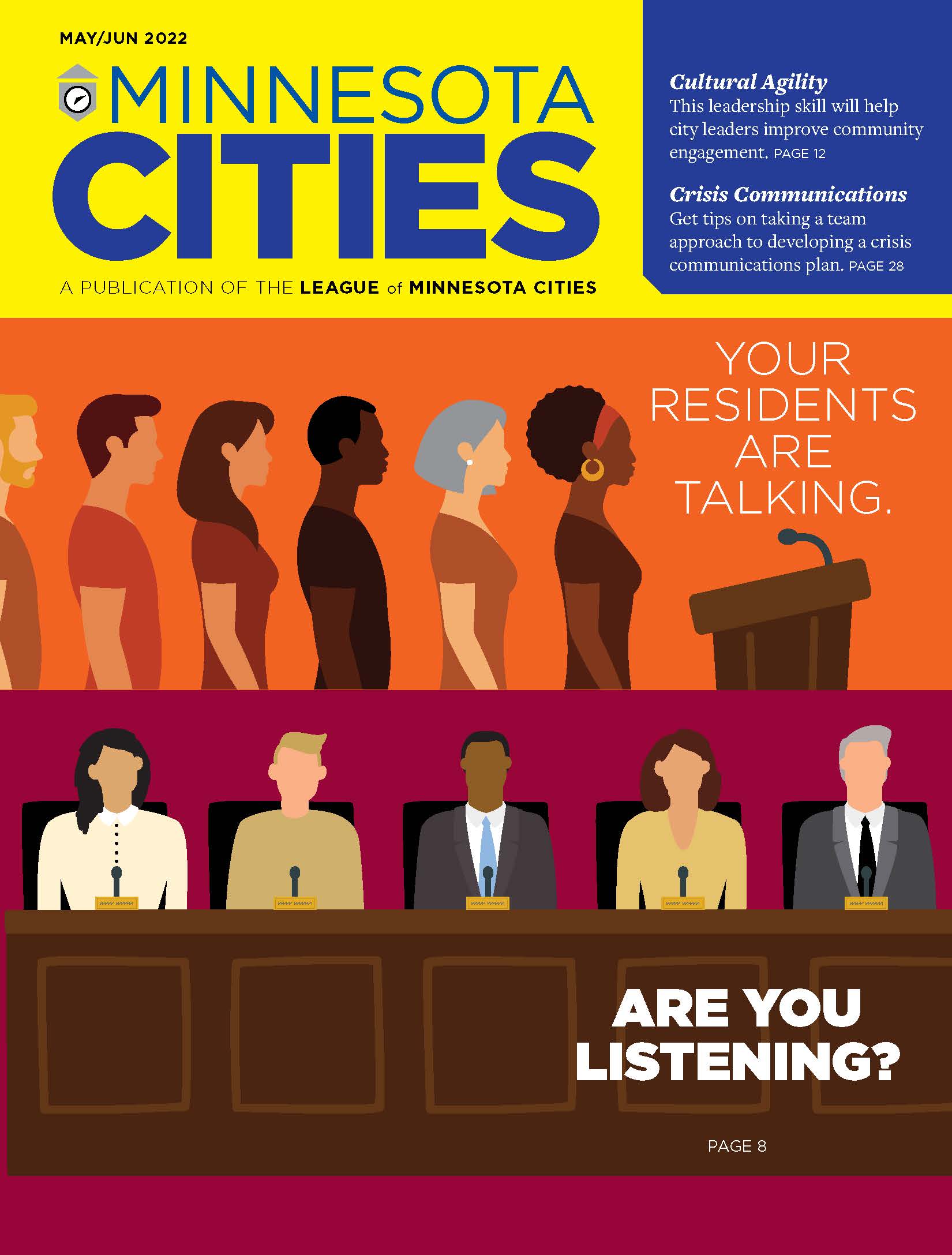 Watch a video about this St. Louis Park project.

With its marsh, woods, restored prairie, meandering trails, and educational programming, the 160-acre Westwood Hills Nature Center in the City of St. Louis Park has educated and entertained residents, while bringing them closer to nature, for the last 40 years.

Yet, increasingly into the 2000s, city staff started noticing limitations with the 2,700-square-foot interpretive center constructed in 1981. Given its size and layout, only one group of residents could use the building at a time. The facility itself, located uphill from the parking lot, was also tricky to get to, especially for visitors with disabilities and families pushing children in strollers.

St. Louis Park Building & Energy Department Director Brian Hoffman performed a facility study of the center in 2013 and noted problems, including water issues, with half of the building sitting too low into the ground. “It wasn’t worth trying to remodel it and bring it up to current standards,” he says. “It was time for a new building.”

St. Louis Park’s initiative was the winner of the League of Minnesota Cities 2021 Sustainable City Award, given in partnership with Minnesota GreenStep Cities, a voluntary program that helps cities achieve their sustainability goals. St. Louis Park has been a GreenStep participant since 2012.

The journey to a new, more sustainable building started in 2015, when the city embarked on a master planning exercise. Staff gathered feedback on the center from residents and other visitors.

At over 50 public meetings with a total of more than 700 residents in attendance, the message was clear: The community wanted a new, updated interpretive center that was more usable, environmentally friendly, and welcoming to all.

The master plan was completed in 2016. Then Hoffman and Nature Center Manager Mark Oestreich worked with other city staff members to further develop building goals, hire an architecture firm to start the design process, and map out funding for the project.

Staff members settled on these four guiding principles to oversee the project:

It was also important for the facility to complement nature through both its materials and design. It would be a model of compliance with the city’s climate action plan, which provides a path to communitywide carbon neutrality by 2040.

“The plan really reflects the city’s strategic priority of environmental stewardship, something the city has focused on and embraced for its entire history,” says city Sustainability Manager Emily Ziring.

Hoffman, Oestreich, and other city staff members spent nine months in the building design phase, visiting the architect’s office every other week to hash out plans. Discussions included how to best orient the building to take advantage of natural air flow and sunlight.

At the same time, funding was solidified. The city budgeted some $12.5 million for construction and issued bonds to pay for the project.

The city also received about $400,000 in funding through a partnership with the Bassett Creek Watershed District. The district created a solution to manage water on the site whereby rainwater would be pulled from the roof through solar-powered pumps that would ultimately recirculate the water into nearby ponds and streams.

During the design phase of the project, staff spent a day running the design through a resilience exercise alongside the architects to understand how future climate changes could impact net-zero performance.

A building site was chosen that’s next to and at grade with the parking lot, making it more visible and accessible. They broke ground in April 2019, and the building was opened to the public in July 2020.

Sustainability efforts started with choosing deconstruction over demolition. Around 85% of materials from the prior center were salvaged for reuse and recycling. The city also saved ceiling beams from the old building and used them to build six exterior benches.

The 13,500-square-foot building’s major sustainable features include a closed loop geothermal system for heating and cooling and a 122-kilowatt rooftop solar array to power the building. Over the course of the year, solar panels offset electricity used.

The city also installed permeable pavers and rain gardens and, following the city’s Environmentally Preferred Purchasing Policy, staff bought such products and materials as Energy Star appliances, WaterSense products, and beams made of laminated pieces of Alaskan yellow cedar instead of old-growth trees.

“This was a lead-by-example project and demonstrated to builders and architects that sustainable building is possible,” Ziring says. “It takes a lot of courage from leadership to make these kinds of bold plans and commitments, but it’s a great way to demonstrate to the community what your values are and what you’re hoping to see from them as well. We want to show that the built environment and nature are intricately linked.”

Hoffman agrees. “We can build high-performing, net-zero buildings, there’s no question about that,” he says, “and they work.”

The facility’s roof provides an overhang on the building’s south side and diffuses direct sunlight in the summer, reducing electricity needs and providing shade. During winter, when the sun sits lower on the horizon, sunlight warms the concrete floor and a thermal wall that radiates heat inside.

On the north side of the center, an overhang above a patio shields guests if it’s raining. When outdoor air is at an ideal temperature, an indicator light notifies employees to open the center’s windows to allow the building to cool naturally.

The building features 18-foot-tall windows, which allow plenty of natural light to spill into the building and give the feel of being immersed in the forest. Bird-safe, thermally insulated glass is used throughout the building. Hydronic heating coils in the flooring in the building’s main areas keep the floor warm for kids sitting in the space for programming during winter.

There’s also a large, all-electric fireplace, free electric car chargers in the parking lot, and a new play structure for kids. The city replaced trees removed during construction with ones resilient to climate change and invasive species.

Community members are thrilled with the new facility, city staff say. No longer do visitors have to leave the building because it’s too crowded or noisy.

Now, there’s plenty of room for kids’ programming, a catering space, and conference rooms for private events like baby showers, business meetings, or small wedding celebrations. Residents say the facility is comfortable and cozy, yet spacious.

Staff chose materials with warm, rich colors, including Alaskan yellow cedar, Douglas fir paneling, and pine around the windows. Paint colors were intentional, too. Designers studied Minnesota’s four biomes and picked colors to represent each with the goal of using the design aesthetic as a teaching tool.

“The building doesn’t feel like an institutional building,” Oestreich says.

“It feels like a warm and welcoming place where you want to spend time. We’ve gotten a lot of positive feedback, and people love the new space.”

The interpretive center solar arrays generated enough power to offset the power pulled from the grid in 2021, accomplishing its net-zero goal, and it has directly impacted the carbon footprint of the community.

Since July 2020, the solar arrays have saved more than 300,000 pounds of carbon dioxide emissions, the equivalent of planting nearly 2,300 trees. Over 50 private tours have been given to various groups interested in replicating the city’s sustainable approaches.

“While the cost for the new facility was high, it’s not all about the money,” Hoffman says. “It’s about reducing our carbon footprint. This is a success story.”

“What’s the cost of not doing projects like this?” Ziring asks. “These are crucial investments we need to make. There’s payback in multiple ways and not just financial. This building is becoming such a crown jewel in the city, and it’s a regional draw.”

Watch a video about this St. Louis Park project.