Back in the 1950s, half of students walked or biked to school, no matter how far away they lived. That rose to 80% for those kids who lived within two miles of the school. 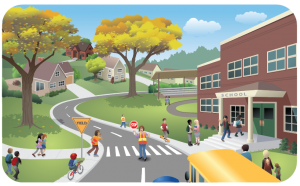 Those numbers have dropped significantly in recent years. But Safe Routes to School (SRTS), a federal program operated locally through the Minnesota Department of Transportation (MnDOT), aims to reverse that trend. It provides resources to communities to help them upgrade infrastructure, enhance safety measures, and make it easier for kids to get to school in more active ways.

The City of Tyler is completely on board with that philosophy. With a new $35 million K-12 school building in the works, community leaders are seeking to make sure students can safely walk or bike there.

To help fund that effort, the city turned to Safe Routes to School and received a $6,900 grant. It will use that money to, among other things, properly outfit new crossing guards and gear up to teach the SRTS “Walk! Bike! Fun!” pedestrian and bicycle safety curriculum to students.

This was the city’s second grant from SRTS. The first grant, received last year, helped Tyler fund its SRTS planning efforts. Those plans have been slowed a bit by the COVID-19 pandemic but will be completed early this summer, just in time to implement strategies for the next school year.

“We’re really trying to be proactive and do as much as we can in the short amount of time that we have before school starts in September,” says Tyler City Administrator Stephanie LaBrune.

Several organizations, from the Minnesota River Area Agency on Aging to the Minnesota Department of Health, have helped make Tyler more walkable in recent years. But the stakes rose with the new school building, which led LaBrune to SRTS. The small town of just over 1,100 still lacks adequate sidewalks.

“It came at the perfect time, with the new school and Tyler being a growing community,” LaBrune says of the initial grants, adding that once the official plan is in place, the city will likely apply for more.

Cities and the Safe Routes program

Tyler is among the hundreds of cities, school districts, and organizations in Minnesota to benefit from SRTS, says Dave Cowan, who coordinates the program through MnDOT’s Office of Transit & Active Transportation.

The program provides grant funding and technical assistance to communities that are interested in making it easier for students to walk or bike to school. That might mean upgrading streets and curbsides, creating educational safety programming, or evaluating what barriers exist that keep students from biking or walking. SRTS can help fund or plan short-term demonstration projects as well as longterm improvements.

While SRTS may sound like it’s only for schools, it’s really for the whole community, and cities are key partners in its success, Cowan says. Cities sometimes take the lead on applying for grants or seeking information about infrastructure-related projects. Their involvement is important since alterations to city streets are often needed to make walking and biking to school safe.

A Safe Routes program might involve a variety of city officials and departments, including traffic engineers, local planners, public works, public health, parks and recreation, and law enforcement. “They bring a lot of different important perspectives to a comprehensive implementation of Safe Routes to School,” Cowan says.

In Richfield (population 36,993), the city and school district have worked together on several SRTS projects, says Will Wlizlo, SRTS program coordinator for Richfield Public Schools. He collaborated with the city’s Transportation Engineer Jack Broz, for example, to install a four-way stop at a busy intersection near an elementary school.

The city’s 2014 Safe Routes to School comprehensive plan — which includes several capital investments and other improvements such as upgrading road markings and providing land and sidewalk options for walkers and bikers while streets are under construction — is in various stages of completion.

The plan also called on the school district to train adult crossing guards, direct students to cross streets in certain locations, use clubs to support walking and biking, and hire a coordinator.

One of Wlizlo’s current projects is creating a bicycle education training program that he hopes to implement soon. “A lot is going to come together in the coming year or so,” he says.

“It’s a big deal,” she says. “You can’t get anything done if you don’t have the plan in place. It’s not going to happen by accident.”

And the city is not leaving anything to chance. Leaders have made it clear that they support biking and walking safety. The Public Works Department has a bicycle plan with specific goals, and the city’s Pedestrian Master Plan aims to improve walking access.

“It makes it more fun when a lot of people are supportive,” Wlizlo says. “It absolutely makes it more effective when there is a big team aligned around a goal.”

In La Crescent, a city of about 5,100, there is a history of promoting healthy lifestyles, starting at least as far back as 2007 when it received an Active Living grant from Blue Cross Blue Shield. At that time, the city “had sidewalks that stopped and didn’t continue, [and] we certainly didn’t have any bike lanes,” says La Crescent resident and volunteer Linda Larson.

But with that grant, the city, its schools, community volunteers, and other groups worked together to improve residents’ opportunities to be more active. Getting involved with the Safe Routes to School program was a natural extension.

“You need to have safe ways for … kids to get to and from school,” Larson says. “Safety is paramount. You have to make being active the easy choice.”

Larson is program director for the local Bike Shoppe, a volunteer program that gives away bikes, and she helps oversee the Safe Routes program in La Crescent. The La Crescent-Hokah Public School district has not hired a coordinator but has used SRTS funds to create programs and educate children about bicycles.

La Crescent has also used SRTS funds to help with its massive “Wagon Wheel” project, which will add a biking and walking bridge to connect its own downtown with the downtown of its neighbor, La Crosse, Wisconsin.

City Administrator Bill Waller says the city’s Bicycle Subcommittee Advisory Group worked with SRTS to help plan a portion of the project, which will benefit kids who live within a mile of a nearby school and currently have to ride the bus.

“The schools, the city, and the county [are] all working together” on the Wagon Wheel project, Waller says.

This year, La Crescent will also use an SRTS demonstration project grant to study what effect changing the road design can have on pedestrian safety.

Over the past few years, the city and county have worked with SRTS on installing rapid flashing beacons on high-traffic roads. “Now we’re looking at other intersections and what we can do to make improvements,” Waller says.

The benefits of SRTS in Rochester

In the City of Rochester (population 119,969), the experience at one elementary school led Rochester Public Schools to seek help from SRTS. The school was having a problem with attendance and tardiness among students from one neighborhood. Upon further research, school leaders learned the students had to backtrack to find a crossing guard to cross the street safely.

The district worked with Olmsted County and the United Way to implement a “Walking School Bus,” where a staff member accompanies the students to school, like a “mother duck.”

Attendance improved, creating an “aha” moment for school officials. “We realized if we had a dedicated staff person who could be doing this for us at more than one site, we could really make an impact,” Ruzek says.

The district applied to Safe Routes to School in 2019 and received a three-year grant to hire a coordinator and start researching additional projects that might be a good fit. Progress has been slowed a bit due to the COVID-19 pandemic and the first coordinator leaving the position. But the Walking School Bus program has been expanded to a half-dozen schools with a goal of reaching 11, she says.

The school district also applied for SRTS technical assistance to improve pedestrian safety education for older kids at buildings where boundaries are changing. The schools collabA father and daughter get ready to bike home from school during a districtwide biking day in Richfield. orated with the city on construction projects and safety measures.

“Just by regularly interfacing with the county and the city and then providing some information to our families, we are seeing an increase in students that walk and bike to school,” Ruzek says.

Dillon Dombrovski, deputy public works director and city engineer for the City of Rochester, says he has worked with Safe Routes, Olmsted County Public Health, the school district, and law enforcement as part of an advisory group aimed at identifying ways to make it safer for kids to walk and bike to school.

“We’ve looked at where we have issues we want to address, whether it’s just an educational thing with parents or it’s an infrastructure situation where we’ve done some smaller projects,” he says. “We’ve always had a focus on these sorts of projects.”

One of the selling points of SRTS, Dombrovski says, is that “in addition to benefiting the schools, it also benefits the broader public.”

La Crescent’s Larson agrees. Better signage, better sidewalks, and safer infrastructure and practices are certainly good for students, but they are also good for the entire community, she says.

“None of this gets done without collaboration,” Larson adds. Everyone works together “to make your community a better place to live.”