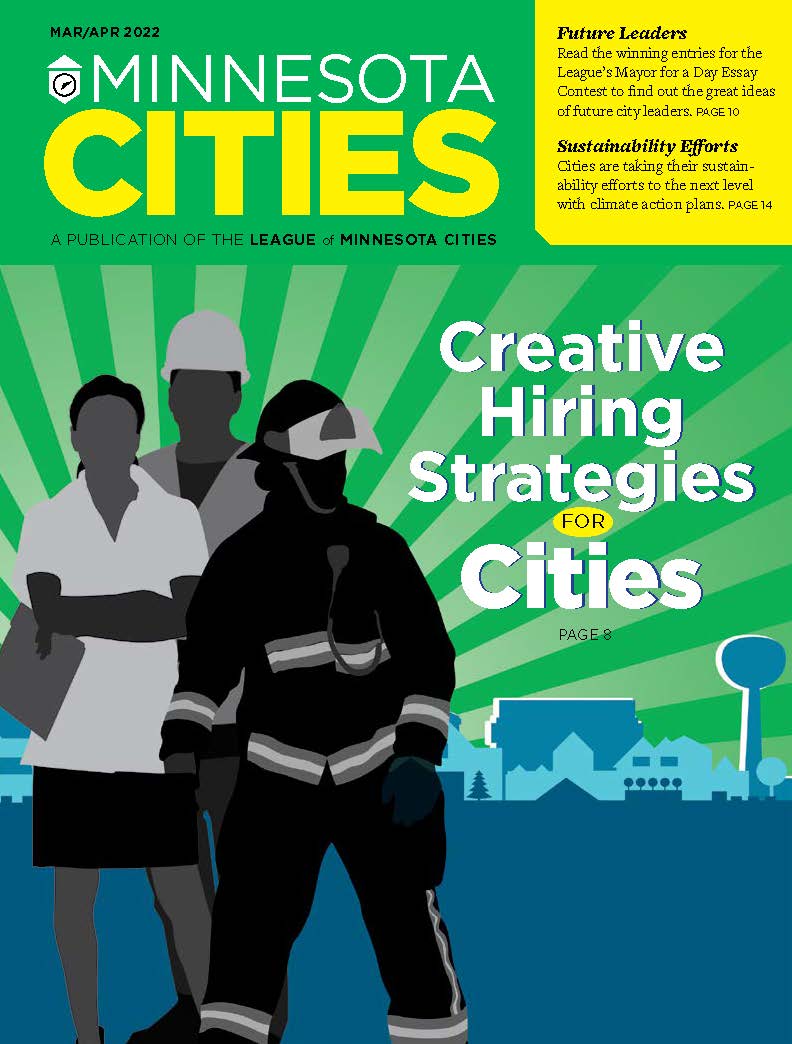 Learn more about this topic at LMCIT’s 2022 Safety and Loss Control Workshops. 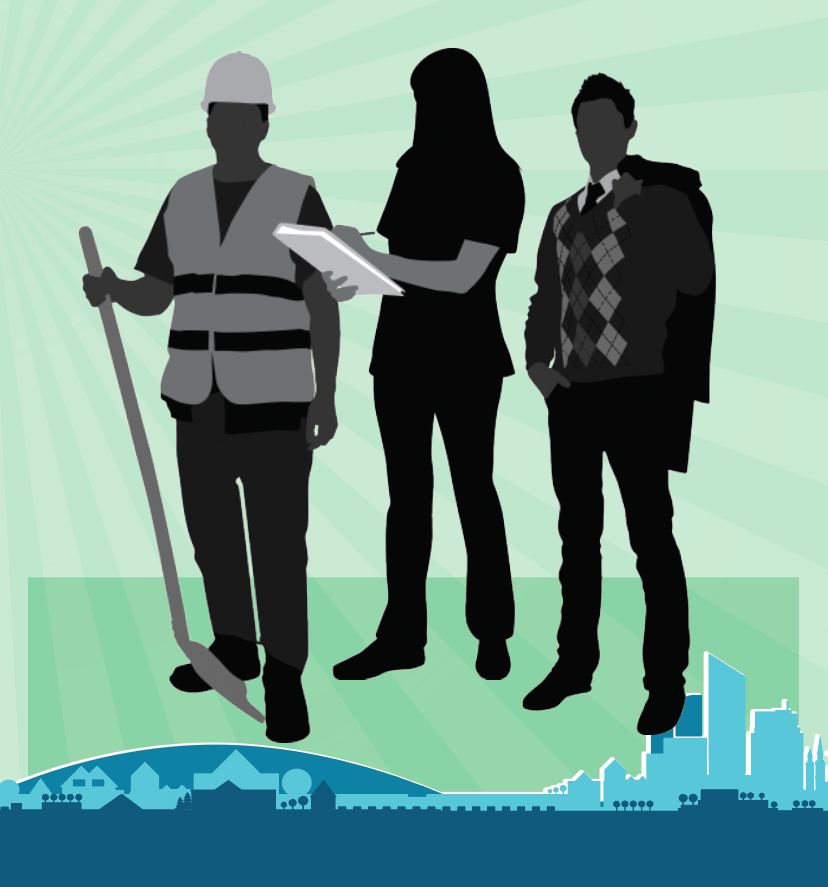 In an economy roiled by the pandemic and people’s willingness to switch jobs, cities need to be creative to find new employees. And they need to be flexible if they want to keep those employees.

The City of Mankato, for one, has seen the effects of a tight job market. Once, the city routinely had 60 to 90 applicants for each open position. Now it’s more common to see 10 applicants. Recently an automotive technician job that used to draw 20 to 25 applications had just one applicant.

“There’s a shift in what people want to do for a career, and maybe less interest in hands-on positions,” says Sheila Huber, Mankato’s director of human resources. “We see people retiring early. It feels like there aren’t the people out there to fill these jobs.”

Numbers from the Minnesota Public Employees Retirement Association confirm that. They say that for the fiscal year ending June 2021, public employee retirements increased about 19% over the previous year. But the number of new public hires was down almost 16% and was the lowest in at least four years.

“Just like every other employer out there, public or private, cities are struggling to recruit and retain employees,” says Jana O’Leary Sullivan, a League of Minnesota Cities (LMC) attorney who works with employment law.

“There’s a crunch with police officers in particular . . . but there are hiring difficulties everywhere, in every kind of job. With people retiring earlier than expected, the exodus is hitting cities hard,” Sullivan says. “Another top reason people are leaving the workforce is that parents now have to handle additional child care and schooling duties.”

In this job market, Sullivan says cities may need to look for job applicants with potential rather than experience. “We want good people who are going to grow and develop in their role and have that public servant mentality,” she says. “When you hire people who are adaptable and eager to learn, sometimes that’s the most important thing.”

It’s also important to take advantage of some of the new recruitment tools that are available. Partnering with a few cities, the League has been experimenting with different technologies that allow employers to do targeted searches for new employees.

One program uses a networking platform that seeks to recruit job hunters who are Black, Indigenous, and people of color. Cities can reach out to candidates whose profiles fit open positions.

The other pilot program involves using a fee-based platform that allows cities to interview job candidates by video. Cities submit questions, and people can record their answers on video whenever it suits them, as long as they meet a deadline.

The format is used for first-round interviews. City hiring managers can review videos and choose their top candidates. Three cities are now trying the program out, and more will be added.

Some cities are having success with new tools they’ve added to their recruitment strategies. For example, Mankato is using some new techniques on social media platforms, says Michelle Meitner, who coordinates hiring for the city. 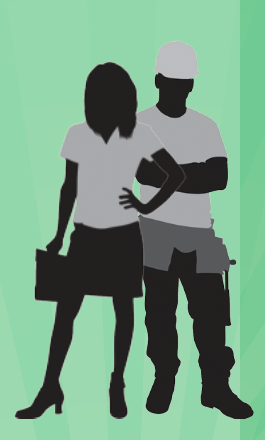 This includes posting videos of employees talking about why they like their jobs. Those videos are attached to job ads in “boosted posts” on Facebook and Instagram. For a small fee, the posts automatically show up in the news feeds of people who fit the city’s target demographic.

“A job description is often a lot of information, but watching a person talk about that job is very accessible,” Meitner says. She thinks that strategy is increasing applicant numbers.

Owatonna also used technology to try to boost the number of candidates for police jobs, which are short of applicants nationwide. Lynn Gorski, the city’s former human resources director, worked with a marketing firm to do three months of targeted online advertising aimed at 18- to 24-year-olds.

When these individuals were using smart phones, tablets, or computers near Minnesota colleges that offer skills-based law enforcement training, an ad promoting Owatonna as a great place to work in law enforcement popped up on their device. The project cost the city $1,500 a month.

Owatonna also used a targeted marketing approach on Facebook to attract paid on-call firefighters, at a cost of about $20 per ad. Gorski, who is now the assistant city administrator in Farmington, says the number of police and fire applicants increased.

“We saw an increase in applications, though it was hard to pinpoint how much of that was from the [online ads],” she says. “I do think it was worth the money because you don’t know until you try. We’re all looking for that perfect candidate, but times have changed. They’re not knocking on our door. We have to knock on their door.”

Even if such ads are seen by a small number of people, the impact can rapidly spread as friends tell friends and the message travels. “This is a really easy way to get in front of people,” Gorski says.

Creative advertising techniques are a great way to get applicants’ attention, but keeping it requires showing that your city is the place they want to be.

One job trend that is directly tied to the pandemic is employees’ desire to have flexibility, either in their schedule or in being able to work from home. For some, not having those options can be a deal breaker. Sullivan says that she’s heard of new hires quitting after as little as two weeks if they don’t like their work situation.

“We used to think of flexibility as an added-on benefit, but now employees are demanding flexibility, including working from home. In this economy, employees have more leverage,” Sullivan says. “We’ve all been engaged in this forced experiment for the last couple of years, and the whole world has had a lot of success with it. A lot of people can do their job at home and do it well, maybe even better than in the office.”

Mankato has put its remote work policy into writing and hopes that will help attract new workers. Before the pandemic, employees could get approval to work from another site. COVID-19 forced more Mankato employees to do that. Eight to 10 months into the pandemic, Huber was surprised to see the result.

“We were a little concerned at the start, but [employees] were more productive and many said they could focus more at home,” she says. “Those who wanted to be in the office had that choice.”

Two of the city’s 260 full-time employees work from home all the time. Both are technology workers who don’t interact with the public. About 20 others spend part of their time working from home. These include employees who work in community development, human resources, finance, and engineering.

The city’s policy requires employees to have the right technology and internet access at home, so they can have consistent communication with co-workers. In addition, new hires must work in the office for the first six months before they’re allowed to work remotely.

“We want them to get to know the city first, but if their job can be done remotely, we would promote that, except in unusual circumstances,” Huber says. “It’s a shift, but we have to continue to evolve. I think these jobs are still attractive. Government jobs [may be seen as] more secure than those in the private sector.”

As you’re looking for new employees, don’t be shy about promoting the perks of working for a city, says LMC Assistant Human Resources Director Joyce Hottinger. It’s true that competing with private employers can be tough. Sometimes companies pay more or offer hiring and referral incentives that haven’t historically been used by cities.

But cities have advantages, too. Many cities offer good benefits, including pensions, which are only a memory in much of the private sector. City employment is also often more stable. And while small and medium-sized cities may not offer as much opportunity to rise through the organization, the sheer breadth of an employee’s responsibilities can be attractive for people looking for variety.

In addition, job seekers are looking at more than just how much a job pays. “Culture may be the big differentiator,” says Hottinger. She encourages cities to promote their workplace culture as a key to job satisfaction.

“I hope that’s a big advantage for cities, because [city employees’] work is so important and can be directly seen by our communities,” Hottinger says.

“Think about what you do. You have direct contact with residents; you get immediate feedback,” she adds. “It’s not an organization where the bottom line is always about dollars. It’s about public good. Meaningful work is important to workers, and cities offer that.”

Learn more about this topic at LMCIT’s 2022 Safety and Loss Control Workshops.