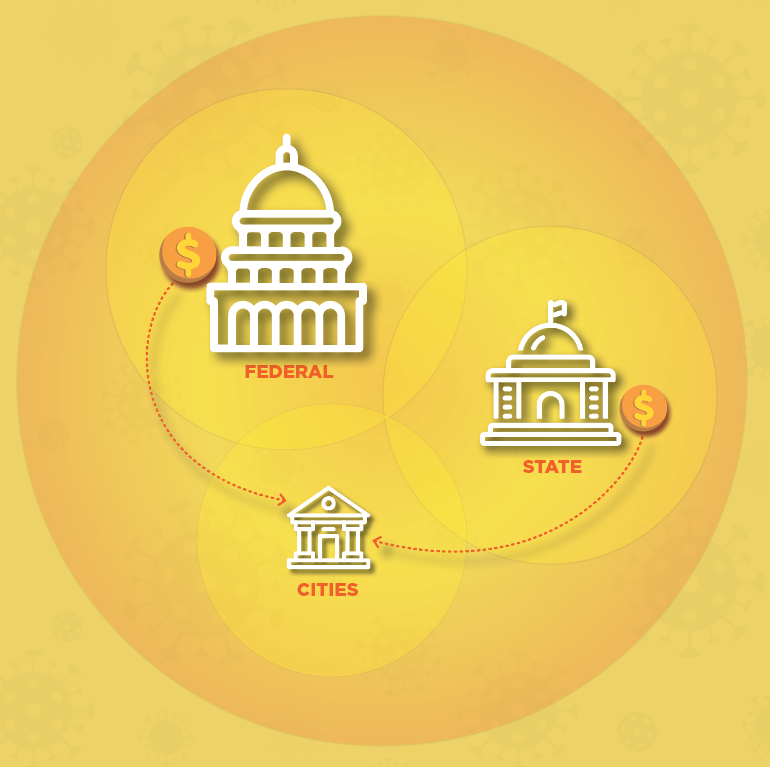 Some cities got help from a federal pandemic relief bill, but more money is needed. In 2021, the financial impact of COVID-19 lingers, affecting not only city budgets but the state budget, too. Minnesota forecasts a $636 million surplus for the biennium ending this June, but a $638 million deficit is projected for fiscal year 2022-2023.

In previous recessions, one target for state cuts was local government aid (LGA). More than 670 Minnesota cities rely on LGA to help fund their operations.

Protecting LGA at the state Legislature and pushing for another federal pandemic relief aid bill in Congress are two of the League of Minnesota Cities’ (LMC) major lobbying priorities for this year. 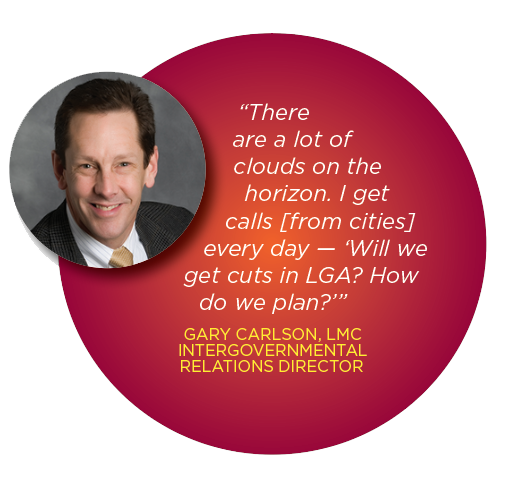 “There was not a single city in the state that planned for the effects of the pandemic,” says Gary Carlson, the League’s intergovernmental relations director. “There are a lot of clouds on the horizon. They [had] to finalize their budgets in December, so there’s been a lot of consternation from city officials. I get calls every day — ‘Will we get cuts in LGA? How do we plan?’”

State officials have said that the unpredictability of COVID-19 makes the state’s economic outlook “volatile,” says Carlson. “If there’s a state deficit, they frequently share their pain with others.”

Just last year, after years of cuts in previous recessions, LGA funding rebounded to its 2002 level of $565 million. “We very much want to protect that funding level, not lose ground, and move on from there,” Carlson says. “But there may be a long-term deficit we need to prepare for. We really rely on that money for funding fire and police and other essential operations.”

One of the cities that gets a significant amount of its funding from LGA is Goodview, a bedroom community of Winona with about 4,100 residents. Goodview is supposed to receive just over $400,000 in LGA funding in 2021. That’s roughly 20% of the city’s general fund. 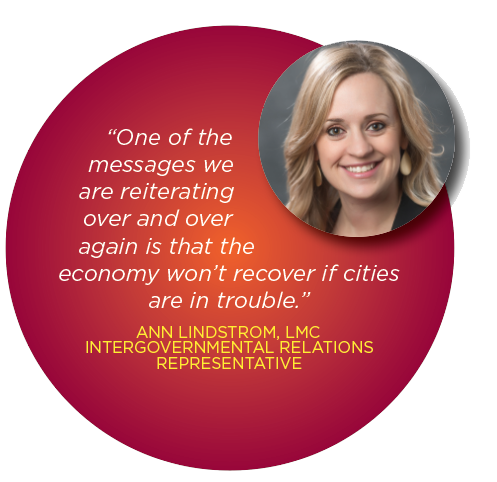 City Administrator Dan Matejka says the city has already budgeted for a 25% cut in LGA. On top of the financial effects of the pandemic, that would be a hard pill for the city to swallow.

“LGA is very important to us because we don’t have a ton of industry here and our tax base isn’t huge,” Matejka says. “Seventy to 80% of our budget comes from property taxes. Every dollar we get in LGA should be a dollar that we’re able to cut from our taxes.”

The city has tried to build up its fund balance, but that was for immediate needs like replacing a collapsing roof or other emergencies, he says.

“If LGA gets thrown on the chopping block, we’re looking at providing the same services by using our fund balance or reserves or raising taxes,” Matejka says. “It’s not good to raise taxes on people who are already hurting [because of the pandemic].”

Some relief via federal funds

Goodview, which has 16 employees, was one of about 560 Minnesota cities that applied to the state for a total of $350 million in aid last summer from the federal Coronavirus Aid, Relief, and Economic Security (CARES) Act, which was passed by Congress last spring. Cities with populations under 200 could apply to their county for aid. The funding, which cities had to spend by mid-November, could be used only for unbudgeted costs related to the pandemic. 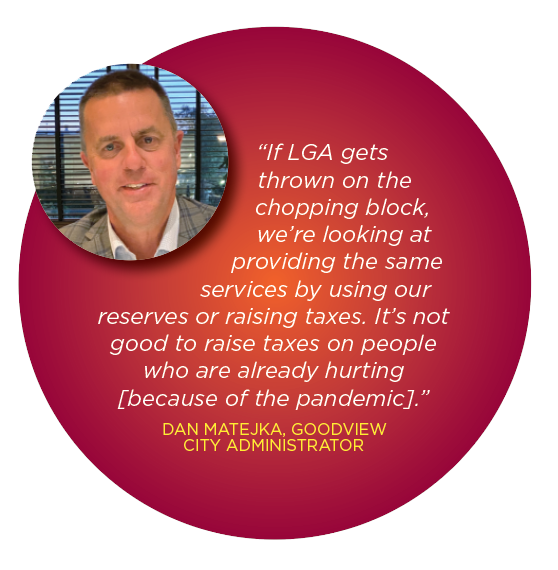 Goodview used its $314,000 in CARES money to recoup expenses for having employees stay home at the start of the pandemic, when workers were pulling staggered shifts to allow for social distancing. The city also started a grant program for businesses that struggled to meet expenses because of COVID-19. This helped small local businesses, including an engine repair shop, a bar, a diner, and a car museum.

The city also used the CARES funding to:

Though the federal law said that the money could be used through the end of the year, Minnesota required that aid be spent by Nov. 15 or be returned to counties or the state.

However, if eligible items or services were ordered with a promised delivery date before Nov. 15 but were not received and paid for until after Nov. 15, they were still allowed if the delay was due to supply chain disruption experienced by the vendor. Still, it wasn’t always clear when that exception would apply. That meant cities were hustling to spend their grants, sometimes encountering supply chain logjams while competing for supplies with the myriad of agencies and businesses that were trying to deal with COVID-19.

The City of Oakdale, which has about 28,000 residents and received $2.1 million in CARES money, spent a good part of it on pandemic needs related to police, fire, and ambulance services, says City Administrator Chris Volkers.

The city also used the federal money for cleaning supplies, technology that allowed the city to reach the public through virtual meetings, and speakers and sound systems that allowed people to space out at in-person events. It also offered assistance to small businesses. The competition for PPE was stiff, Volkers says. And when the city bought touch-free faucets, toilets, and hand dryers for public restrooms, it was difficult to find plumbers and electricians who were free to install them. “The entire state was doing these things, and suppliers were backed up,” she explains, adding that if more aid is provided, she hopes cities will have more time to spend it.

No replacement of lost revenue

The big restriction cities have chafed against is that the federal money could not be used to replace lost revenue. In the long run, those costs — especially unpaid property taxes — could become an issue, the League’s Carlson says. Cities always see a delayed financial impact in crises like these. 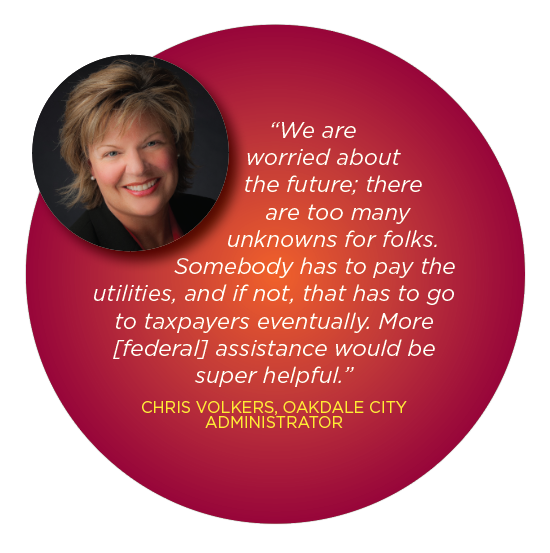 “I have not heard about any cities that are in dire straits yet, but this money only covered the front end of the pandemic,” he says. “If there is no further federal assistance, and property taxes are [uncollected], things could get worse.”

In the early months of the pandemic, some cities allowed financially strapped residents to delay paying utility bills. Oakdale was one of them.

“We delayed collections for the first six months of the pandemic, and we had a significant increase in delinquencies,” Volkers says. “In September, we asked for payment. Many people have asked for payment plans, which we are happy to do. For those who have not, we will be adding it onto their property tax bills.”

Oakdale also lost tens of thousands of dollars in revenue from restrictions on city recreational programming for kids, and may reduce 2021 programming to cope with that.

Carlson says other cities also lost revenue from fees and rentals at community centers, ice arenas, and swimming pools. Some cities with newer facilities were relying on fees to help pay down debt.

When some city-licensed businesses shut down during the early days of the pandemic, some cities refunded license fees to try to ease the burden on businesses. None of that lost revenue was reimbursable with CARES money.

Ann Lindstrom, who works on federal priorities as an LMC intergovernmental relations representative, says the League is pushing for a new CARES Act that is more flexible, allowing direct funding for cities and aid to replace lost revenue.

“One of the messages we are reiterating over and over again is that the economy won’t recover if cities are in trouble,” Lindstrom says. “This needs to happen if we are to recover from COVID-19. Cities can’t operate in the red. They still have to offer services.” Volkers says, “We are worried about the future; there are too many unknowns for folks. People are having to make decisions about what they’re willing to do. Somebody has to pay the utilities, and if not, that has to go to taxpayers eventually. More assistance would be super helpful.”

Last May, the U.S. House of Representatives passed a second pandemic bill that included $375 billion for local governments. The money could be used to replace lost revenue and would be allocated based on the existing block grant formula, so the money would go more directly to cities.

After months of stalled negotiations between the House and Senate, Congress finally did pass a COVID-19 relief bill in late December, and the president signed it. Unfortunately, it did not include direct assistance to state and local governments.

“We have to figure out a way to fund another round of relief for … state and local government,” Smith says.

Not all Minnesota cities got federal pandemic aid, and not all receive LGA. But Carlson says they will experience financial fluctuations just as all cities do in times of economic stress. In addition to trying to protect LGA at the Legislature, the League will be pushing to allow cities more flexibility in how they use tax increment financing and sales taxes.

Though roughly 30 cities have special state authority to levy sales taxes, historically they’ve been dedicated to capital improvement projects like convention centers and ice arenas. Only Duluth has permission to use its sale tax any way it wants.

Seeking financial aid is just one of the League’s legislative priorities for 2021.