The League’s Intergovernmental Relations team will keep members informed of legislative developments that could impact cities. Be sure to subscribe to the Cities Bulletin e-newsletter at www.lmc.org/bulletin. Also, check the League’s website for updates and opportunities to get involved (www.lmc.org/legislative-news) and for information about legislative policies (www.lmc.org/policies). 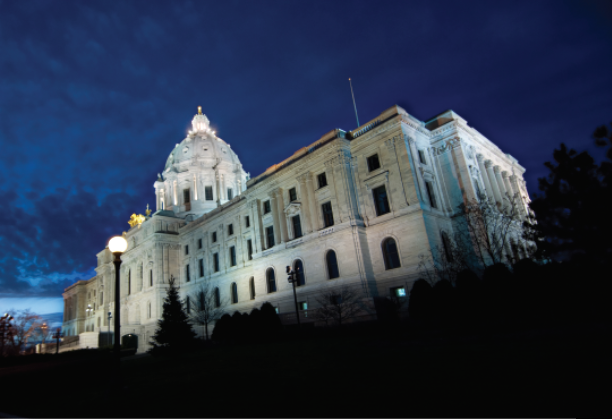 The 92nd biennial session of the Minnesota Legislature began Jan. 5, 2021, with the swearing in of all 134 House members and all 67 Senate members. These numbers include 23 newly elected representatives and 10 newly elected senators. Gov. Tim Walz, a member of the Democratic Farmer Labor (DFL) party, and other constitutional officers were not on the ballot in 2020 and will continue to serve until at least 2022.

The session is getting underway during an unprecedented time in Minnesota and the nation. The COVID-19 virus that began to spread in early 2020 continues to claim and disrupt lives. The financial fallout from the pandemic has devastated small businesses and threatened local, state, and federal economies. In addition, the death of George Floyd while in police custody last May brought racial bias and injustice to the forefront.

The session, which marks the first year of the state’s fiscal biennium, is expected to be intensely focused on these pressing issues. The Legislature must set the state’s budget for the next two years under difficult and evolving circumstances.

Likewise, Senate Republicans retained their majority despite the loss of one seat. The November election resulted in 34 Republicans and 33 DFL senators being elected. Sen. Paul Gazelka (R-Nisswa) was reelected as Senate majority leader, and Sen. Susan Kent (DFL-Woodbury) will continue as minority leader.

In an unexpected twist, two DFL senators, Sen. Tom Bakk from Cook and Sen. David Tomassoni from Chisholm, declared themselves Independents who will now caucus with Republicans. In return, Sen. Bakk was given chairmanship of the Capital Investment Committee, and Sen. Tomassoni was given the gavel for the Higher Education Finance and Policy Committee. Neither would have been tapped to chair committees had they stayed in the minority DFL Caucus.

The November budget forecast was rosier than expected, showing a $636 million surplus for the current biennium. It also revealed a potential $638 million budget deficit for the upcoming two-year budget cycle, although that gap is much smaller than economists anticipated in the spring of 2020.

This number will be updated in the February 2021 budget forecast, just before the Legislature gets serious about setting the next biennial budget.

When will it end?

Constitutionally, the session must end by the first Monday after the third Saturday in May. In 2021, that is May 17. The biennial budget must be in place by July 1, the start of the new fiscal year, to avoid a government shutdown.

The 2021 session will likely be conducted remotely, similar to the end of the 2020 regular session and the seven subsequent special sessions. Advocating in this environment presents numerous challenges, which will be amplified by the large number of new legislators.

Acknowledging these circumstances, along with the expectation that the Legislature will limit its focus to pressing issues related to the economy, the pandemic, and race equity, the League of Minnesota Cities Board of Directors adopted the following three overarching priorities, which will guide the League’s advocacy efforts in 2021:

The League’s Intergovernmental Relations team will keep members informed of legislative developments that could impact cities. Be sure to subscribe to the Cities Bulletin e-newsletter at www.lmc.org/bulletin. Also, check the League’s website for updates and opportunities to get involved (www.lmc.org/legislative-news) and for information about legislative policies (www.lmc.org/policies).