The federal district court granted the city’s motion, but for a different reason. The district court concluded that the ordinance does fall within the act’s preemption clause, reasoning that it meets the clause’s definition of a preempted tobacco product standard. But the act also has a savings clause that exempts local laws from federal preemption if they meet certain criteria. The district court ruled that the ordinance, on its face, meets the savings clause’s criteria because it establishes a requirement relating to the “sale” of tobacco products for “individuals of any age.” R.J. Reynolds Tobacco Co. v. City of Edina, F. Supp. 3d. (D. Minn. Aug. 31, 2020). Note: The manufacturers and retailers have appealed this decision.

Robbie Ashcraft, a police officer for Warren, Arkansas, tried to arrest Davdrin Goffin for burglary and for stealing handguns, bullets, and prescription pain medication. Before the arrest, witnesses told Ashcraft that Goffin was armed, possibly intoxicated, and dangerous. When Goffin broke free from arrest, he fled toward a group of bystanders, and moved as though he was reaching into his waistband.

Ashcraft shot him once in the back. Goffin survived and sued for excessive use of deadly force in violation of his constitutional rights, claiming that Ashcraft knew when she shot him that another officer had patted him down just before he fled and had found nothing. The pat-down had failed to discover that Goffin was, in fact, carrying a loaded 9 mm pistol magazine and extra bullets. Generally, an officer may constitutionally use deadly force when he or she reasonably believes that a fleeing suspect poses a threat of serious harm to him- or herself or to others.

The district court dismissed the lawsuit, ruling that Ashcraft was entitled to qualified immunity. The 8th U.S. Circuit Court of Appeals, in a divided decision, upheld the district court’s decision, concluding that Ashcraft was entitled to qualified immunity because at the time of the shooting, it was not clearly established law that a pat-down that removes nothing from a suspect eliminates an officer’s probable cause that the suspect poses a threat of serious physical harm. Goffin v. Ashcraft, F.3d (8th Cir. 2020). 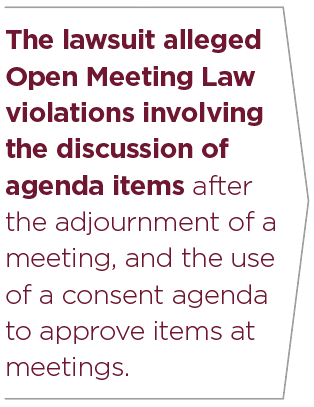 Some former City Council members brought a lawsuit under the Open Meeting Law against the mayor, council members, planning commission members, and the city administrator for the City of Grant. The lawsuit alleged violations involving the discussion of agenda items after the adjournment of a meeting, and the use of a consent agenda to approve items at meetings.

The City of Apple Valley adopted provisions in its code that prohibit certain sex offenders from residing within 1,500 feet of schools, child care centers, places of worship, and parks. A group of sex offenders who are subject to these residence requirements filed a lawsuit, using “John Doe” pseudonyms (court-authorized fictitious names), to challenge the constitutionality of these residence requirements. The group claimed the requirements violate the U.S. Constitution’s Ex Post Facto Clause, which prohibits the government from adopting laws that increase punishment for criminal acts after they have been committed.

The John Does made a motion for a preliminary injunction (court-issued restraining order) that would prohibit the city from enforcing the challenged residence requirements while the lawsuit is ongoing. The federal district court issued an order denying the motion, reasoning that the John Does had not satisfied the standard required for the issuance of a preliminary injunction. The court reasoned in part that it is not likely that the John Does will succeed in proving that the residence requirements are unconstitutional. The district court noted that the 8th U.S. Circuit Court of Appeals has previously concluded that similar requirements did not violate the Ex Post Facto Clause. Doe v. City of Apple Valley, No. 20-CV-0499 (D. Minn. Sept. 16, 2020).

Alyssa Sweesy sued Joseph Ramirez, an officer with the Blaine Police Department, and the City of Blaine after she was injured in a motor vehicle collision with Ramirez’s squad car. At the time of the accident, Ramirez was responding to an emergency involving a woman who was threatening to jump off a bridge. Ramirez was driving above the posted speed limit with the squad car’s emergency lights activated, but without its siren activated. 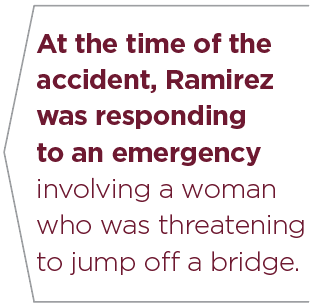 Ramirez had decided not to activate the siren because it would warn the woman that police were arriving and might cause her to jump. Ramirez had just entered an intersection against a red light when he saw Sweesy’s car for the first time. He immediately braked but was unable to avoid hitting her car. Before entering the intersection, Sweesy had seen that an Opticom traffic light was activated. She knew that this meant that emergency vehicles might be near, but she had decided to enter the intersection to turn left because she was facing a green left-turn arrow.

The district court granted summary judgment (court-ordered judgment without a trial) in favor of Ramirez and the city, ruling that Ramirez was entitled to official immunity, and that the city was entitled to vicarious official immunity. Public officials generally are entitled to immunity from lawsuits challenging their official duties that require the exercise of discretion, unless the official is guilty of a willful or malicious wrong. Sweesy appealed, arguing that there was a fact question for a jury to decide about whether Ramirez’s driving conduct was willful or malicious. The Minnesota Court of Appeals affirmed the district court’s decision, reasoning that there was no evidence that Ramirez’s driving conduct was willful or malicious. Sweesy v. Ramirez, No. A20-0017 (Minn. Ct. App. Oct. 19, 2020) (unpublished decision). Note: LMCIT represented the city.

Woodland Gale Owners’ Association appealed the City of Woodland’s denial of its request for a variance seeking permission to add plumbing to a building located 14.4 feet from Lake Minnetonka. The building was originally a pump house, but it currently functions as a cabana. The city’s residents use private sewage disposal systems instead of a citywide sewage system.

The district court upheld the city’s denial, which was based in part on the conclusion that the variance failed to comply with the city’s code and comprehensive plan and on the concern that having a sewage line so close to the lakeshore would pose an environmental risk. The association appealed, claiming that the district court erred in two ways: (1) by relying on a written resolution the city had adopted a month after the meeting at which it voted to deny the variance, and (2) by concluding there was adequate evidence to support the city’s decision.

The Minnesota Court of Appeals affirmed the district court’s decision, ruling that state law authorized the city to adopt the supporting resolution at the next meeting after the vote to deny the variance, and that there was adequate evidence to support the city’s decision. Woodland Gale Owners’ Association v. City of Woodland, No. A20-0057 (Minn. Ct. App. Aug. 17, 2020) (unpublished decision). Note: LMCIT represented the city.