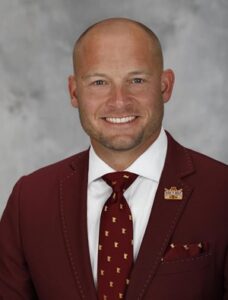 In 2019, Fleck led Minnesota to unprecedented heights as the Gophers won 10 games in the regular season for the first time since 1905. Minnesota also won seven Big Ten games for the first time in school history and Fleck was voted Big Ten Coach of the Year by his fellow conference head coaches.

The Gophers ascended to No. 7 in the AP Poll, which was the team’s highest ranking since it was No. 5 on Nov. 19, 1962. Minnesota was also ranked No. 8 in the College Football Playoffs, which is its highest CFP ranking in school history.

In 2018, Fleck led Minnesota to a 7-6 record and regular-season wins against Wisconsin, Purdue, Indiana, Fresno State, Miami (Ohio) and New Mexico State. The Gophers beat Georgia Tech 34-10 in the Quick Lane Bowl and the 24-point margin of victory was the largest bowl win in school history. Minnesota also made history when it won the final game of the regular season (Wisconsin) and its bowl game (Georgia Tech), as that was the first time ever that the Gophers won the final game of the season and a bowl game.

Under Fleck, a young Minnesota team beat rival Wisconsin for the first time since 2003 and for the first time on the road since 1994 to reclaim Paul Bunyan’s Axe. The Gophers also downed Purdue’s potent offense, as they held the Boilers to a season low in points (10) and yards (233). Minnesota also beat Fresno State, which finished the season ranked No. 18, to give the Bulldogs one of their two defeats om the season. The win against Fresno State also marked the first time that Minnesota beat a team ranked in the final AP poll since 1999.

In 2017, Fleck led a young and inexperienced Gopher squad, as 49 of Minnesota’s 110 players (44.5%) were freshmen or redshirt freshmen and 76 (69%) were underclassmen. Fleck guided Minnesota to a 5-7 record and those five wins were the most by a first-year Gopher head coach new to the program since the legendary Murray Warmath won seven games in 1954.

Fleck won his Gopher debut against Buffalo, which made him the school’s first head coach to win his debut since John Gutekunst in 1986 (before Fleck, Minnesota’s six most recent head coaches all lost their first game). Minnesota then posted a dominating 48-14 win at Oregon State, which made Fleck the first Gopher coach to win a true road opener since 1954 when Warmath and the Gophers won 46-7 at Pittsburgh.

Minnesota’s 34-point win at Oregon State was the Gophers’ tenth largest margin of victory in a road game since 1920 and largest since 2006. The 48 points were the most the Gophers scored on the road since they beat Northwestern 49-21 in 1980.

Off the field, Fleck and his team can often be found at the University of Minnesota Masonic Children’s Hospital and gave back to the community by hosting a diaper drive, canned food drive and turkey drive this year. In the classroom, Minnesota has posted program record GPAs under Fleck.

Fleck came to Minnesota after spending four years as the head coach at Western Michigan, where he was 30-22 overall and 21-11 in the Mid-American Conference. While leading the Broncos, Fleck authored one of the most memorable turnarounds in college football history. The Broncos were 1-11 in his first year in 2013, but ended the 2016 season with a No. 12 ranking, a 13-1 record, a conference championship and a berth in the Cotton Bowl.

The Broncos were 12-0 in the 2016 regular season and posted wins against Big Ten opponents Northwestern and Illinois. Fleck then led his team to a 29-23 win against Ohio in the Mid-American Conference championship game before ending the season with a narrow bowl game defeat to Wisconsin.

Earning FBS Region 3 Coach of the Year from the American Football Coaches Association, Fleck was also named a finalist for the Eddie Robinson Award and the George Munger Award after Western Michigan became the first team in MAC history to win each of its eight league games by 14 or more points.

Fleck turned Western Michigan into a pipeline for the NFL as well. In 2016, the Broncos had Willie Beavers (121st overall to the Minnesota Vikings) and Daniel Braverman (230th overall to the Chicago Bears) taken in the NFL Draft.

In the 2017, Fleck saw three of his former players selected from Western Michigan in Corey Davis (fifth overall to the Tennessee Titans), Taylor Moton (64th overall to the Carolina Panthers) and Keion Adams (248th overall to the Pittsburgh Steelers). Davis, who was the first Consensus All-American in Western Michigan history, caught 91 passes for 1,427 yards and 18 touchdowns in 2016. He ended his career with 5,212 yards in four seasons, which makes him the Football Bowl Subdivision all-time career receiving record holder. Davis joined Randy Moss as the only Mid-American Conference receiver to be drafted in the first round.

Off the field, Western Michigan had a program-record seven student-athletes named to the 2016 MAC Distinguished Scholar Athlete team and the Bronco team posted a 3.14 program GPA in Fleck’s last semester at the school.

Prior to his time at Western Michigan, Fleck served as the wide receivers coach for the NFL’s Tampa Bay Buccaneers in 2012 and coached the receivers at Rutgers from 2010-11. He coached receivers and was the recruiting coordinator at Northern Illinois in 2009 and tutored the receivers for the Huskies from 2007-08. Fleck’s coaching career began at Ohio State as a graduate assistant in 2006.

Fleck played receiver at Northern Illinois from 1999-2003 and helped lead the Huskies to a No. 10 ranking, a 10-2 record and wins against Maryland, Alabama and Iowa State in his final season. He ranks in the top five in Northern Illinois history in career receptions (179) and receiving yards (2,162). Fleck holds the school record for punt returns (87) and ranks second in punt return yards (716). He earned First Team All-Mid-American Conference in 2003 and was named Academic All-MAC and Second Team CoSIDA Academic All-American. He graduated in 2004 with a bachelor’s degree in elementary education.

Fleck played the 2004-05 seasons with the NFL’s San Francisco 49ers. He signed with the 49ers as a free agent in 2004 and spent most of his time on the practice squad before seeing action against New England late in the season. He spent the 2005 season on the injured reserve roster and in 2006 he stopped playing professionally and started his coaching career.